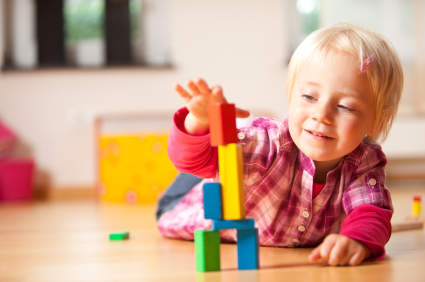 Amanda was a first-time mother to a two year old boy named Joel. Joel used ‘Mama’ and ‘Dada’, but no other words to communicate his needs and wants. At home, Joel would go to the kitchen, stand below the cupboards, reach up, and make sounds. Amanda knew he wanted something, but could not always figure out what. In these situations, Joel’s attempts at communication often ended in crying and tantrums.

Throughout the day, Amanda would ask Joel to repeat words that she said to him, but he rarely did. Amanda also noticed that Joel’s responses to directions she gave him were not consistent. When Amanda asked him to get his shoes or hand her a toy he was holding, he sometimes complied. Other times Joel seemed at a loss for what to do. He would stand still and look at her, or look around, as if trying to figure out what his mother meant. When Amanda took Joel to music classes or to the park, he sometimes hit other children or grabbed their toys.
One day, Joel had been playing with two other preschoolers in the sand box at the park. Joel had started to scream and had clutched a plastic shovel to his chest, tears streaming down his face. The two other children were covered with sand that Joel had thrown at them. The other mothers had looked in disapproval at Joel and said to Amanda ‘You should teach your son to use his words’; then, they guided their own children away.  Amanda had thought that bringing Joel to the park to play with other children was a good idea, but it seemed to have been just the opposite.  She knew that Joel enjoyed playing with other children, but he couldn’t ask them for toys that he wanted.  Joel’s inability to communicate using words was affecting his chances to interact and form friendships with other children.

Amanda was concerned about her son’s lack of words. When she discussed this with her friends, who also had children, they told her that boys are always slower to develop and that she shouldn’t worry. Her family doctor agreed that Joel was a bit behind in his talking, but told her not to worry. Amanda talked to her in-laws about taking Joel to see a speech-language pathologist, but they said ‘How can someone help Joel with his talking when he is not talking yet?’ In spite of this, she called the number for the speech and language program in her community, but was told that she would have to wait several months for an appointment. Amanda felt that valuable time was passing and that she wasn’t doing anything to help her son with his communication.so she contacted a private speech-therapy clinic and booked Joel in for an assessment.

Ten percent of all children will experience some type of speech and language difficulty. Boys are four times more likely than girls to experience delays or disorders of communication. A lack of ability to communicate decreases a child’s opportunities to interact with peers. A speech-language pathology assessment can help identify a child’s strengths and weaknesses in the areas of understanding and using language. Delays in communication may be the result of an underlying condition, or may exist on its own.

Speech-language pathology treatment for children CAN begin even if a child uses very few words. Speech-language pathologists work closely with parents of very young children because they are often more comfortable with their parents than with strangers. Parents are taught strategies to help improve their child’s response to instructions. During treatment sessions, parents also learn to recognize their child’s attempts at communication and to encourage their child to communicate more often and in more situations.