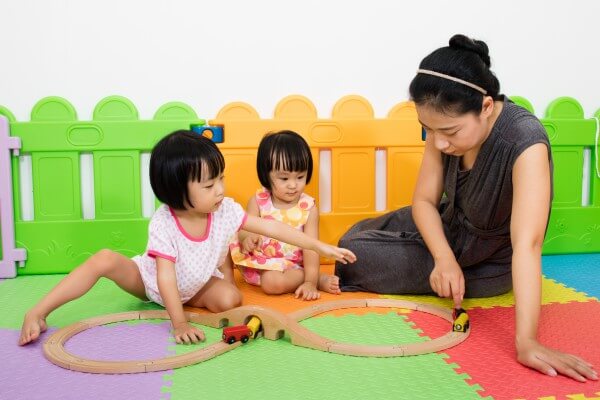 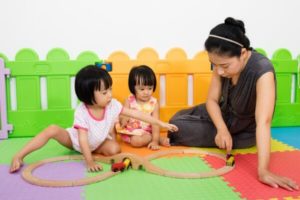 Are you raising your children to be bilingual? What do we mean? According to the definition, bilingualism refers to ‘individuals or groups of people who acquire communicative skills in more than one language’ (CQ3, 2006:268). In simpler terms, it means that you’re communicating in two languages regularly and interchangeably with your children at home.

Parents often ask us if it’s ok to speak to their kids in two languages. The simple answer is: yes. Learning an additional language from early on does not cause language delay.  In fact, children will go through the same process and typical patterns as they would if they were just learning one language.

To illustrate, let’s use an example where a child attends daycare and speaks English there, but speaks her parents’ first language at home. These stages do not happen one after the other, but rather on a continuum.

Stage 1: Use of Home Language

The child will typically attempt to communicate at daycare with their home language. They are unaware at first that they are not being understood by others.

During this stage, the child may not speak, but rather will listen and observe as they build up their knowledge and vocabulary of the new language, in this case, English. The child will still communicate non-verbally through facial expressions, hand signals, and play.

At this point in their development of English language skills, the child might begin using memorized phrases and will test them out in social interaction.

Once they find that the memorized phrases are being received, the child will begin to further develop vocabulary and will begin communicating using the second language. The grammar and usage will not always be correct, however, but the child is able to get his point across.

By this stage, the child is able to speak correctly in her second language, using correct grammar, vocabulary, and pronunciation.

Whether your child is learning two languages or several, the conditions for learning are the same. The most important contributor to the successful development of good communication and language skills is making him or her feel safe, valued, and secure.

If you’re not sure if your child’s language is developing at the right pace, or you’d like to discuss bringing up a bilingual child in more details, contact us today.