Working on Speech and Language Goals and Making It Fun 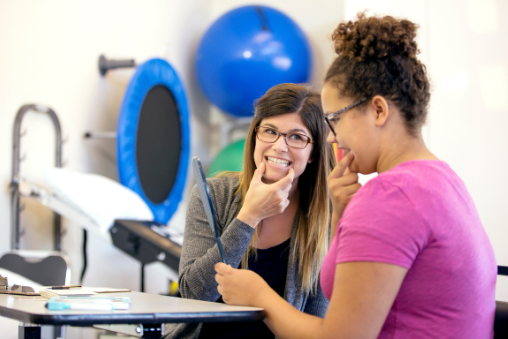 When your child has many speech and language issues and there are many goals to work on in therapy, how does the speech-language pathologist (S-LP) work on EVERYTHING and at the same time ensure therapy is fun and engaging?

Speech-language pathologists know that there is a strong relationship between language and speech sound disorders (SSD). For example, if a child has difficulty with the /s/ sound and may mispronounce this sound, he/she may also have difficulty with expressive language as well.  For example, the child may also have difficulty with   plurals “I have many boys in my classroom” and possessives e.g. “the boy’s shoes are blue.” Furthermore all of this can affect the child’s ability to tell a story, ask questions and more.

There are many techniques and activities we select to ensure that during therapy there are frequent communicative opportunities, so that the therapist (and parent) can model and help the child produce the correct sounds and language structures.

Johnny, 4 years old, had trouble producing /s/ sounds and had expressive language issues with plurals, possessives, asking questions, taking turns and overall having a conversation with a beginning, middle and end.  The therapist began by teaching the /s/ sound and then practiced this sound in isolation and then words.

The S-LP then introduced other fun, functional activities.

When reading the book The Very Busy Spider by Eric Carle, the S-LP worked on speech as there were many /s/ words in the book that could be modelled and produced, some examples included “spinning” and “spider”. At the same time the language goals included teaching Johnny animal vocabulary as well as actions. Other communication goals involved teaching Johnny to tell a story with a beginning, middle and end, making predictions (what happens next), both very important goals for reading and writing.

Another fun technique for Johnny included playing shop with the S-LP using items which included the /s/ sound e.g. “sandwiches”, “soup” and “salad”. Turn- taking and asking questions were also included as language goals in this task.

The parents were informed of all the therapy techniques and the reasons for choosing certain goals. Fun techniques were suggested for home practice including hiding pictures, objects ( with /s/) around the room and having the child find them and name the object, glue the pictures in a book and make up a story, and play shop at home with /s/ words.

Overall, these engaging and fun activities with Johnny which addressed speech and language issues were important for immediate success.

THE ULTIMATE GOAL OF ANY S-LP TREATMENT PLAN ENSURES YOUR CHILD IS A SUCCESSFUL COMMUNICATOR IN THE HOME, SCHOOL AND EXPERIENCES SUCCESS MAKING FRIENDS.